It is important to know first, that there are Federal laws, State laws and local municipal ordinances that impact on the legality of your actions. What may be legal within Federal law may not apply in all states. There may also be rules posted in certain establishments that are not enforceable as laws. For now, it helps to know what you read here is a general overview of essentials and not all there is, by any means. It is ultimately your responsibility as a firearms owner to know applicable firearms laws and regulations for your area. Purchase of handguns and related laws will be covered in a separate article.

The laws as written, are often difficult to decipher what actually applies to you. This is frustrating for all of us. It is imperative to have a resource that also defines the terms used in the laws, as written. There are a few pages of terms defined in the WA State Department of Fish and Wildlife pamphlet referenced for this article, which is widely available where firearms are sold in Washington. Their web site is also listed at the end of this article. Then, as laws are written, there is also much not stated, or implied. For example, where it is stated that concealed-carry is illegal without a license; leaves out that open-carry is legal. There is another string of laws for open-carry, which will not be discussed here. You would have to know to read further to find them, however. My husband has mentioned a number of occasions where he has seen persons in public places with open-carry firearms. He likes to point out that this means of carry may not be helpful if you find yourself in a life-threatening situation where there is also a person capable of and exhibiting deadly force. First, once a threat is recognized and concerned citizens are looking around more aware of a problem, you may be implicated as an accomplice if your firearm is noticed. While police officers have training to process such circumstances, why make yourself a point of such concern? This is particularly why concealed-carry is optimal, in the first place. I will focus this discussion on laws that pertain to the concealed-carry license holder. You will find it easy to recognize why we might suggest you apply for the Concealed Pistol License (CPL).

There is no requirement for training in the State of Washington. However, it is implied that responsible firearms owners have safe gun handling skills wherever you read about the state laws. Whether you search on the ATF, or Fish and Wildlife Dept., safety is the main topic for firearms. We promote this philosophy whole-heartedly and hope you find resources on this web site to achieve those skills over time. In truth, that training involves instruction from highly qualified instructors. The handgun owner must then commit to regular practice to gain and maintain proficiency. There is an investment of time and money in this commitment. There is most importantly, a mindset that one must cultivate to be prepared to stay focused and calm in times of life-threatening situations. It is a well-documented fact that in stressful situations, a person will revert to habitual patterns. There is training required in many states as a prerequisite to firearm licensure or ownership. Check the web site: www.uscarry.com to get more details for your state.

A Concealed Pistol License is NOT valid in certain places:
⦁ Restricted access areas of a commercial airport
⦁ Restricted portion of a jail or law enforcement facility
⦁ Areas of buildings used for court proceedings
⦁ Restricted areas of mental health facilities
⦁ Any area of an establishment classified by the state liquor control board as off-limits to person under the age of 21. (a sign must be posted).
⦁ While on the site of an outdoor music festival (2000 or more persons, 5 hrs or longer duration, and not an arena, auditorium, coliseum, etc. or government sponsored fair)
⦁ Elementary or secondary school premises, school-provided transportation, or areas of facilities while being used exclusively by public or private schools. Except if you have a CPL and are picking up or dropping off a student. (Federal law prohibits firearms on the grounds of, or within 1,000 feet from the grounds of a public, parochial or private school UNLESS the individual possessing the firearm is licensed to do so by the State in which the school zone is located or a political subdivision of the State)
⦁ Federal buildings/ facilities: all buildings leased or rented by the federal government (and their parking lots)
⦁ Post Office property (also includes parking lots)
⦁ Military bases
⦁ US Army Corps of Engineers property (Some exemptions apply)
⦁ AMTRAK trains
⦁ BLM land (Some exemptions apply)
⦁ Indian Reservations (Carry on Indian property is controlled by Tribal Law. Some WA tribes recognize state CPLs and some do not. You should research specifics if you want to carry on tribal property.

Traveling with a handgun:
The details of this can be found in Section 926A of Title 18 of the US Code under Airline Travel. The pistol must be declared, unloaded, and in a locked hard case. Up to 11lbs of ammo allowed (which varies by airline). Bottom line, you should call, or check online, for the specifics for each airline company. When checking your luggage, you must go to the ticket counter and fill out a declaration tag, which is then placed in your luggage with the handgun. You may also have to accompany your luggage to the TSA baggage check station. (Plan for an extra 30 minutes in the check in process.)

Reciprocity of WA CPL in other states:
Your WA CPL is currently recognized in 26 states. However, each state’s laws differ regarding where you can and cannot carry, and in various other requirements that go with carrying a concealed handgun. It is up to you to know and follow the laws of the state(s) in which you are carrying so plan to do some research before you travel. 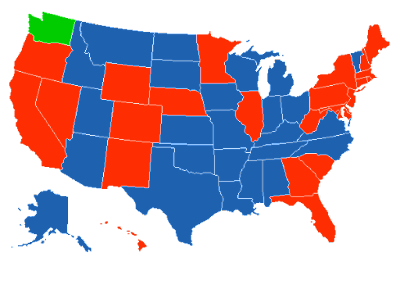 There are also states that allow non-residents to get a concealed carry license from their state. Utah and Florida are among the best known of these. A WA resident with a WA CPL and a UT non-resident CPL can carry concealed in 31 states.

There are many reasons individuals may choose to carry a pistol. We live in a country where this is mostly still legal. There are political agendas to change this basic right. That is a topic for another discussion. It helps to mention this here, for you to consider your personal reasons to carry a pistol. Is it necessary to simply exercise the right? Do you have the confidence in your training and fitness to use it appropriately if the need arises? Do you understand all of the legal implications involved that define need? The terms ‘Legally Justified Deadly Force’ will always be a topic covered in a court of law. Trust that every bullet fired outside of a safe gun range environment “has a lawyer attached.”

The criteria that will determine whether that bullet was justified are:
⦁ Ability: The attacker must have the physical ability to cause you death or grave bodily harm (permanent injury or disability).
⦁ Opportunity: The attacker must be close enough to use their ability
⦁ Jeopardy (Imminent): An attacker is placing, or is about to place a person’s life in danger using their Ability and Opportunity.

Most reputable defensive handgun training companies will cover the details of these criteria. This all goes back to the concept of mindset, training and having a clear understanding of why you want to carry a pistol in the first place. If you are willing to address these topics, and have it clear in your mind, and train regularly to know how to respond; you will be able to discern when it is best to just run away, even if there is a burglar in your house. A handgun is a deadly weapon. So is a pencil, if you know how to use it as such. The point is, handguns have no other intended purpose. Therefore, they must also be handled and operated with due caution. Firearms laws have been added as controls for defining due cautions. Sadly, criminals do not pay much attention to those laws and the law-abiding citizens find more and more constraints upon their due diligence for safety. Know how the laws pertain to you. Know your rights. Know when it is legal to use deadly force in your defense.